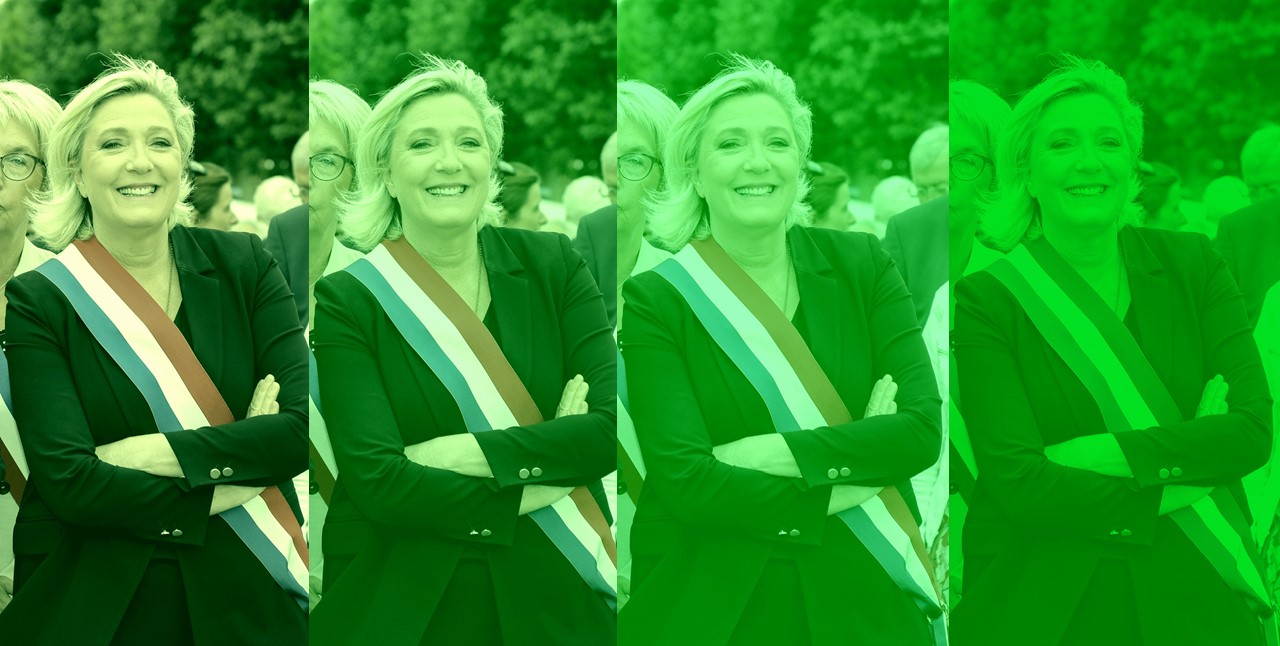 Rootedness, borders and anti-capitalism to counter a “totalitarian” globalist left ideology: Ecology in the metapolitics of the French far right today

Abstract: This article looks at the metapolitics of the French far right, a sphere of organisations and personalities that are waging a counter-hegemonic cultural fight, thought to be a precondition to political change. In France, singularly an incubator for a green nationalist narrative, this so-called “Gramscianism of the right” is today embodied by countless media outlets. This article critically analyses the content on “ecology” of selected materials from this sphere, in order to shed light on the main discourses around this topic. This research reveals a diversity of approaches towards ecology, coherent with the variety of trends present in the far-right metapolitics. From remains of climate denialism to right-wing co-optations of degrowth, it revolves around an opposition to immigration, symbol of a wider left globalist ideology that threatens European identity. Such an ecology thus requires rootedness and the acknowledgment of natural limits that apply as much to nature as to humans.

Climate change mitigation is facing yet another obstacle: in the last decade, countries around the world have experienced a significant rise of far-right populist parties. While the majority openly display a climate denialist line, France seems to be an incubator for a green nationalist narrative expressed primarily by the Rassemblement National (Malm and The Zetkin Collective, forthcoming 2021). The party’s manifesto for the last European elections, tailored by Hervé Juvin, a European MP since then, wishes to create a “European ecological civilisation”: the protection of identity and the environment go hand in hand through localism and rootedness in a closed territory (Rassemblement National, 2019); a notion summarized by Jordan Bardella as: “the best ally of ecology is the border” (Landrieu, 2019). The party-politics billboard is however only the tip of the far-right iceberg.

At the end of the 1960’s, the intellectual movement Nouvelle Droite was launched around its think-tank GRECE [1] and the figure of Alain de Benoist. Moving away from street activism and parliamentary politics, it undertook the intellectual path of “metapolitics”. The underlying belief of the movement is that cultural and ideological change is a precondition to political transformations, therefore advocating for a “Gramscianism of the right” (GRECE, 1982; Bar-on, 2013; Dohet 2016; Keucheyan, 2017; Savatier 2017; Camus, 2019). This “battle of ideas” is a strategy that has gained power throughout the years and is today waged through a plethora of media outlets (from magazines to websites and videos), generated by an interconnected network of leading figures and mother organisations. A “Fachosphère” in expansion (Albertini and Doucet, 2016; François, 2018), the metapolitical enterprises of cultural reconquest contribute to the normalisation of far-right narratives, eventually assisting their success in election polls, in a latent dialectical relation with the party-politics actors.

What are the discourses around ecology emerging from this sphere? This article especially draws on the works of Stéphane François (2009, 2016a, 2016b), Zoé Carle (2017) and Paul Guillibert (2019), some of the few scholars who have investigated the ecological dimensions of the French far right. This subject of study is diverse and so are the ecological approaches. Whether it derives from Christian or neo-pagan, nationalist or pan-europeanist, anti-capitalist or national-liberal inspirations, ecology is used to reinforce variations of identitarian, “rooted” and “human” conceptions of ecology used to justify profoundly ethno-differentialist, anti-egalitarian and conservative visions of the world (François, 2009, 2016a, 2016b; Carle, 2017; Schlegel, 2018; Guillibert, 2019; Vincent, 2019; Forchtner, 2019).

Furthermore, ecology as a theme challenges the traditional left/right divide as it provides a diagnostical common ground for critics of capitalism on both ends of the political spectrum. Degrowth is a good example that illustrates this tension (Cazenave, 2018; François, 2019) as it has succeeded in bringing about controversial collaborations such as those between the French degrowth philosopher Serge Latouche and Alain de Benoist, also a décroissance [2] proponent (de Benoist 2018[2007]).  Every so often, Latouche comfortably spreads degrowth ideas through de Benoist’s media outlets such as Krisis (Latouche, 2018), Éléments (Latouche, 2017) or in Thibault Isabel’s l’Inactuelle (Latouche, 2019), an author of the same circles. Yet, many degrowth scholars have repeatedly denounced right-wing co-optations of degrowth. They emphasize the fundamental differences and incompatibilities between movements such as the Nouvelle Droite and the degrowth movement, especially in terms of equality, justice, solidarity, democracy and wider intersectionality (Flipo et al., 2012; Lepesant, 2012; Demaria et al., 2013; Eversberg, 2019); values traditionally considered left-wing. This study of recent selected materials from the metapolitical sphere thus aims to understand and expose dangerous narratives around what far-right interpretations of ecology entail.

Image 1:»When the Rassemblement National goes green», illustration made by the author, original photo retrieved from the RN’s official images. This article presents the results of a thematic analysis conducted on a purposive sample of 64 articles and 2 videos, using both inductive and deductive coding (Lapadat 2010; Krippendorff, 2018). Some actors openly state to have chosen a metapolitical strategy such as Marion Maréchal, the Le Pen niece (Belaïch, 2018; Soullier, 2019), or the New Right. With the help of the far-right map of La Horde (2019), an anti-fascist organisation, I considered the other sources to similarly belong to the realm of metapolitics, as I believe they participate in the ideological crusade of the far right. The material comes from 12 sources combining online content and printed articles, published between January 2019 and the end of February 2020 (See Table 1 for a summary and Annex 1 for details).

As mentioned above, the sources gathered for the purpose of this article are far from being homogeneous. Intrinsic ideological divisions regard issues such as religion, sovereignty, the economy and progress. Trying to draw clear lines between overlapping categories is not the goal of this article; rather, it is to bring up common recurrent themes on what those actors have to say on “ecology” on the one hand, and of their own vision of it on the other. Here follows a critical summary of the predominant discourses brought to light in the analysis.

Greta Thunberg is however seen as a mere symbol of a greater power at work: “who is behind Greta?” (6.11). Some claim that she is a propaganda puppet, a “marketing product” of green capitalists who manipulate her for their economic interests (2.1; 5.1; 6.6; 6.7; 7.3); especially renewable energy entrepreneurs whose wind turbines destroy the cultural landscape (2.1; 2.4; 6.2). At a greater scale, she is seen as an ambassador of the “green alarmist doxa”, spreading the ideology of the left at large (4.2; 6.6). A simple proof is her intersectional approach on the climate crisis: racism, colonization, patriarchy, capitalism; i.e a confusing neo-marxist mishmash typical of far-left globalists holding the European white man responsible for all evils (1.1; 3.1; 4.2; 4.3; 6.4). Two arguments emerge from this premise. First, ecology is yet another guilt strategy already burdening the European memory (1.1; 4.1; 6.5): “ecology is the punishment imposed by the world superclass to the Westerners” (1.5). Second, ensuing from this logic is the notion that ecology is both the tool and the path to the implementation of a communist dictatorship (2.4; 6.11; 8.3): “When will we get a little green book?” (6.11). Totalitarian measures are deployed such as the enforcement of taxes and norms, the silencing of divergent opinions to impose its “ideological deliriums” like post-coloniality, neo-feminism and gender theory (1.4; 1.5; 1.11; 2.4; 3.1; 4.1; 6.4; 6.8; 8.2; 12.1) – which feeds the myth of Cultural Marxism. Ecology is being instrumentalized for the implementation of a “world government” (6.5; 6.6; 12.1), a term worshipped by conspiracy theorists.

In the metapolitics of the French far right, ecology aims to preserve nature within the larger objective of protecting European identity – but with no concern for global climate justice. “To defend one’s people is also to defend both one’s nature and one’s culture” (5.5), explains Alain de Benoist. The fundamental idea of the existence of natural boundaries not to be overstepped is extrapolated from physical resources to human nature. This argument is used in favour of concrete borders to protect the natural habitat of a specific people from the alleged ecologically and culturally destructive left-wing liberal globalisation. While some stick to a classic conservative vision, others agree that, regardless of religious beliefs, there is a need for an alternative modernity away from neo-liberal capitalism, blurring the lines between left and right. Some of those “right-wing Gramscians”, similar to degrowth activists, fight against the colonization of the imaginaries and the alienation caused by the current economic paradigm and the ensuing marketization of more and more aspects of life. They rightly reject the nonsense of endless growth and the hegemony of profit making. However, they also reject other people and multiculturalism according to an alleged natural order of the world. The advertised diversity is merely a smokescreen for a new form of racism: a cultural (Taguieff, 1990), differentialist one (François, 2009). This worldview is in clear opposition to the pluriverse promoted by the degrowth movement (Demaria & Kothari 2017; D’Alisa, 2019; Kothari et al., 2019). Alain de Benoist fights capitalism on one side but applauds the radical xenophobic actions of the activists of Génération Identitaire on the other (5.5). As the socio-ecological crisis intensifies and continues to uncover the excesses of neo-liberal capitalism, being attentive to the alliances induced by hybrids of left and right approaches to ecology is not only relevant but crucial. Alliances reflect acceptation and normalisation. “Shouldn’t we give up on the right-left dichotomy […]? For example, do I have to forbid Alain de Benoist to claim himself to belong to degrowth because he is classified to the Right?”, Latouche (2013) asks. This point certainly deserves further debate, yet I believe that global solidarity and intersectional justice are non-negotiable pillars of ecology. The Corona virus pandemic might accelerate the need to reaffirm “our ecology” as opposed to “theirs”, in an adaptation of André Gorz’s words (Durand & Keugheyan, 2020). Right-wing co-optations of degrowth and alike should be resisted before they advance further into party politics.

Forchtner, B., 2019. Far-right articulations of the natural environment. In B. Forchtner. (ed.), The Far Right and the Environment, London, Routledge, 1-17.

Kothari, A., A. Salleh, A. Escobar, F. Demaria, and A. Acosta, (eds.), 2019. Pluriverse: A post-development dictionary. Tulika Books and Authorsupfront.

Malm, A., and the Zetkin Collective, forthcoming 2021, White Skin, Black Fuels: On the Dangers of Fossil Fascism, London, Verso.