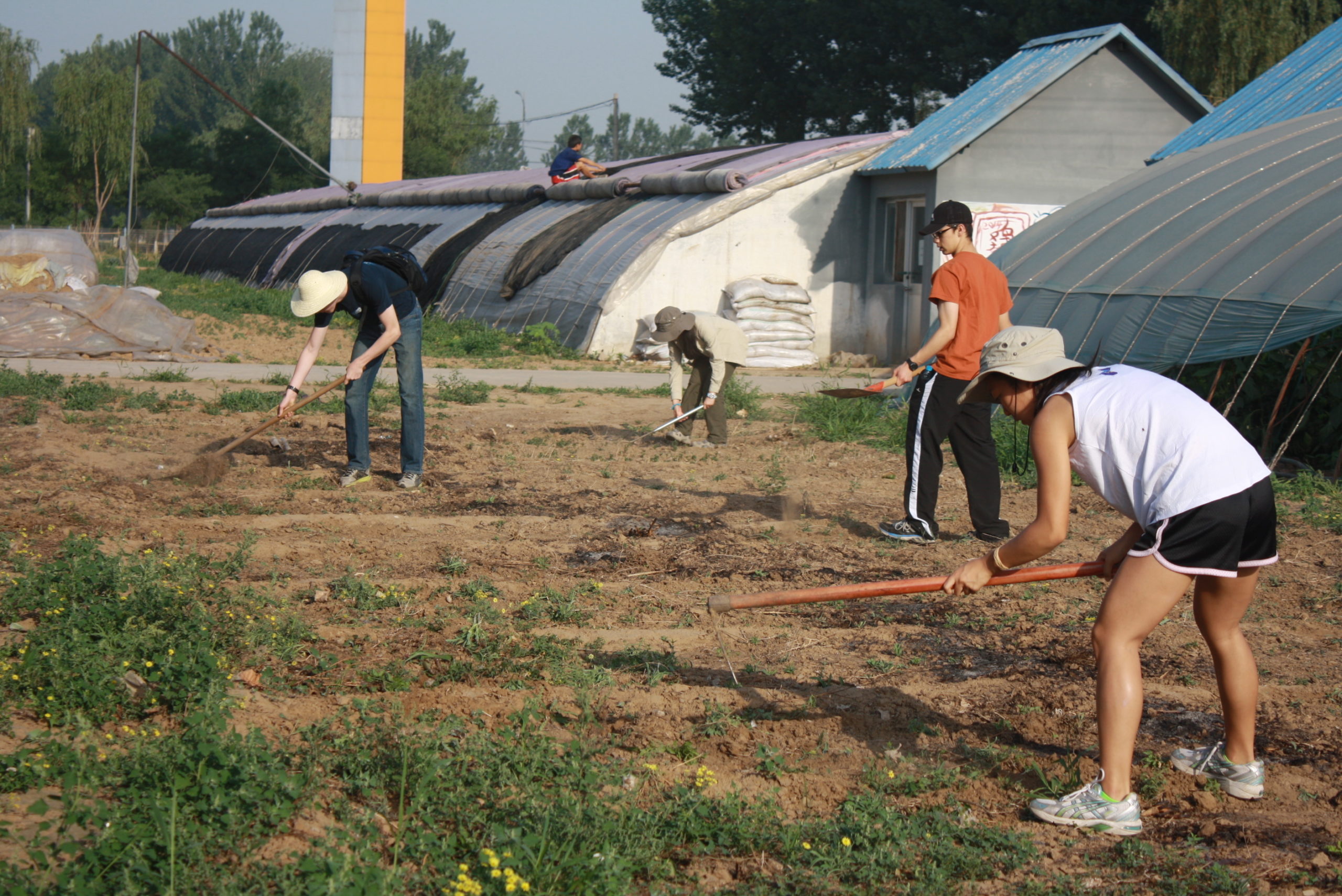 The world is facing multiple environmental crises that demand transformative changes to industrial society on a scale never before seen.[2] The answer to whether global society will be able to achieve the necessary transformation may lie with civil society movements challenging current paradigms. In China this challenge is especially important. This article introduces a Chinese civil society movement – the New Rural Reconstruction Movement (NRRM), a movement that can be seen as challenging mainstream thought about how to construct a socially just and environmentally sound society.

The Chinese state is argued to be tackling the global environmental crisis through an “ecological modernization paradigm” (Xue, 2016: 606) based on economic growth, stimulation of markets and technological innovation. Although this approach seems to be the position of most countries around the globe it is considered to be unfeasible and “utopian” by numerous academics and commentators (Hickel, 2018; Mathai, Oliveira, & Dale, 2018; Monbiot, 2015; Ward et. al., 2016). Chinese environmental ‘success’ stories reported in the media are often based on this ecological modernization paradigm.[3] However, I argue this hegemonic discourse crowds out other voices on the ground in China that are challenging this narrative. This article introduces a “grassroots” (Si & Scott, 2016) Chinese movement called the New Rural Reconstruction Movement (NRRM), a movement critical of the recent development model of China and one that aims to set up alternative projects to protect the environment and rural life.

Image 1. From a NRRM affiliated CSA on the outskirts of Beijing farmers collect the weekly vegetable share for CSA members – used with permission from organization founder. Source: https://sharedharvest.cn/aboutuszh/2017/10/01/%E5%86%9C%E5%9C%BA%E7%AE%80%E4%BB%8B/ The NRRM is a movement of often loosely connected projects and people (Hale, 2013:53), led “by intellectuals and university students” but with “participation at all levels of society”.[4] It is considered to have emerged in the 1990s (Day, 2008) with the publication of Wen Tiejun’s[5] thesis on the ‘three dimensional problem of rural China’ (Wen, 2001). Although Wen’s school is not the only school of thought within the NRRM it is considered the most influential (Hale, 2013) and Wen is considered “the leading intellectual” in the NRRM (Yan & Chen, 2013: 968). The main theoretical base of the Wen school is the Centre for Rural Reconstruction at Renmin University (Day & Hale, 2007). The Centre for Rural Reconstruction’s aim is “integrating with grassroots and local culture” to reconstruct the rural and reverse the “decline resulting from rapid industrialization”.[6] A second important school within the NRRM is associated with He Xuefeng[7] and the Center for Rural Governance Studies (Day & Hale, 2007).

The NRRM is connected to the earlier Rural Reconstruction Movement (RRM) which began in the late 1920s (Si & Scott, 2016; He, Zhang & Wen, 2014) which “…sought to empower peasants by providing education and job training, facilitating autonomous organisations among them, improving public health conditions, etc.” (Si & Scott, 2016:1087). The most well-known RRM practitioners include James Yen, a Christian educated in the USA (Hayford, 1990) and Liang Shuming a Confucian with democratic-socialist leanings (Alitto, 1979). Both have been recognised by the Wen school of NRRM by the naming of two practical NRRM bases – 1. The James Yen Institute for Rural Reconstruction[8] and 2. The Liang Shuming Rural Reconstruction Centre (Day & Hale, 2007). However according to Jia’en & Jie (2011a) the current NRRM includes a new important issue, the Chinese ecological crisis.

This new emphasis on the ecological crisis is summed up by Wen et al (2012) – “the real question with regard to the future of China, we would argue, is more ecological than economic.”[9] The NRRM links the ecological crisis and the multiple intertwined crises of rural China to the Western development model (Jia’en & Jie, 2011a) and critiques marketisation and capitalism. Wen (2013; 2007) for example argues the European development model has large costs for society and the environment and is not suitable for China. In Wen et al. (2012) this critique is explicit and strong, they argue, with strong Polanyian overtures, that global competition and the commodification of people and nature “destroys nature and family” and “homogenizes…rural indigenous traditional knowledge”. They criticise China’s modernisation process by arguing China’s social and economic problems have been  caused by the “rush to participate in the system of global capital”.[10]

Other practical projects include Community Supported Agriculture (CSA). Wen argues the NRRM has helped foster over 300 CSAs in China in order to help deal with food safety issues.[12] He argues China’s food safety issues come from three main sources 1. industrial transformation of agriculture 2. technological transformation of nature and 3. the market economy transformation.[13] Therefore NRRM CSAs are aimed to be a push against these trends. CSAs also aim at urban-rural integration to help deal with urban-rural inequalities. Further to these projects, some NRRM scholars argue for a revival in agricultural traditions and spirituality. For example, Wen (2008) argues a revival in agricultural traditions including Taoism and Confucianism can help foster environmental protection. He Xuefeng (2007) similarly argues that NRRM should pursue “…a new state of harmony between man and nature as well as a great renaissance of traditional Chinese civilization» (page 38). He strongly advocates a strengthening of cultural activities in order to mitigate the negative effects of the consumer economy on rural society.

These critiques of global capitalism and establishment of alternatives leads scholars such as Day (2008) to link the NRRM with other rural movements “such as the Zapatistas in Mexico or the Landless Workers Movement (MST) in Brazil” (page 51). In Alcock (forthcoming) I argue that the NRRM has theoretical and practical links to the Degrowth movement (D’Alisa, Demaria, & Kallis, 2015) that was initiated in Europe and which now has a growing and diverse global following. What these links demonstrate is that progressive social and environmental based arguments which critique the current development paradigm are being debated in China as around the world. This may give environmentalists, sympathetic to NRRM arguments, hope for a shift to a more sustainable future, however, the NRRM faces a number of constraints. In 2003, Wen’s thesis on the ‘three dimensional problem of rural China’ was officially given high priority in the Central Committee of the Chinese Communist Party’s work report (He, Zhang & Wen, 2014). However, NRRM scholars argue that the movement is still ignored by «…the mainstream ideology of China…» (He, Zhang & Wen, 2014: 101). Further to this, a number of outside observers are pessimistic about the NRRM’s ability to fundamentally transform rural China along less market norms because rural China is becoming increasingly marketized (Day & Schneider, 2017) and government policy seems to suggest small-scale agriculture will eventually be abandoned (Andreas & Zhan, 2016; Schneider, 2015).

Environmentalists around the globe should be heartened by the debates being articulated within the NRRM. Although relatively small in Chinese terms and with a number of constraints, the NRRM shows that progressive and critical environmental arguments that challenge the ecological modernisation paradigm have space in China to be heard. The NRRM is a good place for researchers to start interacting with Chinese progressive environmental debates. More scholarship should be dedicated to researching environmental movements and other bottom up civil society movements in China. More research would likely uncover a large variety of movements with many different influences, which would help to illuminate and challenge the hegemonic discourse of ecological modernisation. As China becomes more influential on the world stage these ‘bottom up’[14] movements may well become increasingly important to global society. For example, in the world’s fight against global warming, Chinese based environmental movements may be critical in fostering a shift in Chinese public awareness towards the radical changes needed to avert this and other collective global environmental crises.

Day, A. & M. Schneider, 2017, The end of alternatives? Capitalist transformation, rural activism and the politics of possibility in China, The Journal of Peasant Studies, 1-25.

Monbiot, G., 2015, Meet the ecomodernists: ignorant of history and paradoxically old-fashioned, The Guardian, available at: https://www.theguardian.com/environment/georgemonbiot/2015/sep/24/meet-the-ecomodernists-ignorant-of-history-and-paradoxically-old-fashioned consulted on October 9th 2018

Schneider, M., 2015, What, then, is a Chinese peasant? Nongmin discourses and agroindustrialization in contemporary China. Agriculture and Human Values, vol. 32, (2), 331–46

Xue, J., 2016, China at the crossroad, Ecological modernization or ecosocialism? in; Crisis System: a Critical Realist and Environmental Critique of Economics and the Economy, Eds. Næss, Petter & Price, Leigh, Routledge

[1] DPhil candidate in the Department of Politics and International Relations at Oxford University. Questions and comments to the author can be sent to rowan.alcock@sant.ox.ac.uk or on Twitter @TweetRo4

[5] Wen is a professor who has won numerous awards and held positions as the Executive Director of the Sustainable Development Advanced Study Institute at Renmin University and the Director of the Rural Reconstruction Centre and has served on government advisory bodies. Renmin University Biography, available at:  http://www.ruc.edu.cn/archives/18630 consulted on October 9th 2018

[7] He is a professor who has held positions as the director of China Rural Governance Research Center of Huazhong University of Science and Technology and more recently the head of the Department of Sociology at Wuhan University. Wuhan University Announcement, available at:  http://www.whu.edu.cn/info/1118/8882.htm consulted on October 9th 2018, He blogs at http://hexuefengblog.blog.163.com/  consulted on October 9th 2018

[11] “Peasants” is translated from ‘农民’ and are defined as people who have the contracted right to farm land but do not individually own the land they farm.